Reviews of Great and Not so Great Books.

Review~ The Dark Seduction of Miss Jane by Amanda McIntyre 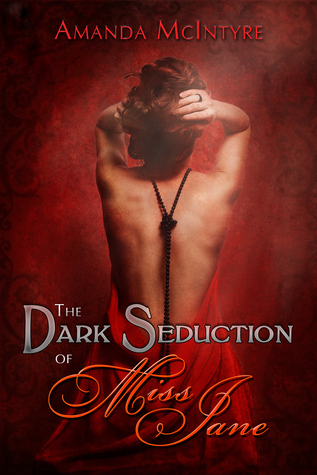 The Dark Seduction of Miss Jane

Source: Received for an honest review from the publicist.

A scandalous betrayal sets Miss Jane Goodwin on an unexpected journey to London to pursue her dream of being the first female investigative journalist, but she soon finds herself in a hotbed of murder and controversy. Seduced by the passions of a mysterious lover and stalked by a madman, Jane falls prey to her desires as tensions mount, only to discover a deadly secret that threatens more than just her trust in men.

Inspector Randolph Mansfield is one of Scotland Yard’s elite, battling the dark secrets of his past while trying to solve a rash of grisly murders threatening to mar Queen Victoria’s Jubilee. His respite is the anonymity he finds in the decadence of a private gentleman’s club, until a determined American journalist goes undercover in search of her stalker and he finds the lines between protection and passion blurred. But as tensions heat and her life is threatened, he must choose whether to reveal his true identity at the risk of losing both her trust and his career.

This is a fantastic erotic romance with an elegant historical backdrop. The setting of the story in historic London (when women still needed escorts) gives an extra sense of the forbidden with Miss Jane’s independent manner throughout the story.  After finding her fiancé in a compromising position Jane breaks her engagement rather publicly, and then goes to London to participate in a women’s writing house. Here she begins her endeavor as an investigative journalist much to the dismay of her host, who thinks it much too dangerous for a woman! Upon her arrival in London she discovers there is a murderer on the loose, and the authorities have no lead. She takes it upon herself to go undercover and finds much more than she bargains for, both about the murderer and herself.

Inspector Mansfield is a tortured soul who blames himself for the tragedies in his past. He seeks solace in a gentleman’s club, but soon finds something about Miss Jane that piques his interest. The two find themselves facing off for most of the book, but what a ride for the reader!  Well-paced with detailed imagery for both the times and the people, this story is enchanting. Well worth the read, this is an excellent single novel that tells a whole story in one sitting. Received for an honest review.

Review Courtesy of: My Book Addictions and More