Reviews of Great and Not so Great Books.

Review~ Dream On by M. Kircher 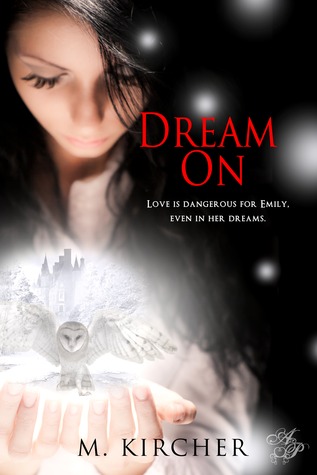 Source: Received for an honest review.

Seventeen-year-old dreamwalker, Em, might have to choose—leave her mother forever in the dreamworld or save the life of hot, rebel Gabe.

Emily Dal Monte and her mother, Lily, are special. They’re humans with a special glitch in their genetic code that allows them to explore the fantastic, and often terrifying, world of their dreams for as long as they choose to remain asleep. But when Em’s father is killed in a tragic accident and her distraught mother loses herself more and more in the dreams of her crumbling mind, Em is forced to support the two of them the only way she knows how, by writing down her mother’s amazing dreams and selling them as books. Enter Gabriel Sobel, the punk newcomer at Em’s high school who realizes Em is the daughter of his favorite, reclusive author. Gabe can’t figure out why Em keeps brushing him off and makes it his mission to find out what’s really going on at the Dal Monte household. He stumbles upon their shocking family secret just as Lily takes a turn for the worse. It’s up to Em, Gabe, and one very nosy book editor to hop from one extraordinary dream to the next, to find Lily and convince her to wake up before she loses her mind…and before Em loses her first chance at love.

The premise behind this book is really interesting and I think the author pulls that part off pretty nicely. It takes an elaborate imagination to think up some of the settings in this story. The dialogue was a bit weak though and some of the situations the characters were in (outside of the paranormal aspect) just didn’t seem realistic. Emily is a bit dramatic at times, and overly sensitive to some of the comments made by Gabe. Gabe was, overall, my favorite character. Quirky, fun-loving, and punkish were his best traits, though he did have some pushiness as well. As the description states, he “makes it is mission” to figure out what’s going on at Em’s house… stalker much? I just don’t see him being that nosy with so little interaction between the two prior to that point in the story.

Overall, not a bad story, just not as full as it could have been. This writer definitely has potential, and I definitely recommend her as a new author to read. Her other series is absolutely worth perusing. Received for an honest review.

Review Courtesy of: My Book Addictions and More

Dream On, m.Kircher, YA Paranormal